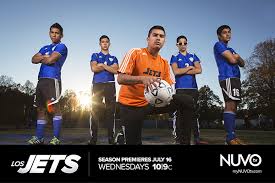 The national cable broadcast of “Los Jets” was a hit!  The six-episode documentary series, executively produced by Jennifer Lopez for NuvoTV, presented some of the daily challenges and victories experienced by the young Latino men playing on the undersized soccer team of Jordan Matthews High School (Siler City, NC).  For many American viewers, the series offered new and diverse narratives of immigrating Latino families and cultures, alternative images to stereotyped machismo and youth criminality, and touching opportunities to reflect on the human spirit that ties our communities. Also featured in the series was Dr. Paul Cuadros,  Executive Director of the Scholars Latino Initiative at UNC-Chapel Hill, who leads and inspires the students as their coach, mentor, and advocate. The competitive human drive and spirit for betterment characterized in the documentary are typical of American values, as the series as articulates contemporary re-visions of “the American Dream.” But those of us who are familiar with Paul’s work at SLI know it’s also a story of love for community, devotion to family, and a calling to service. We’re all so proud of our SLI-UNC familia!